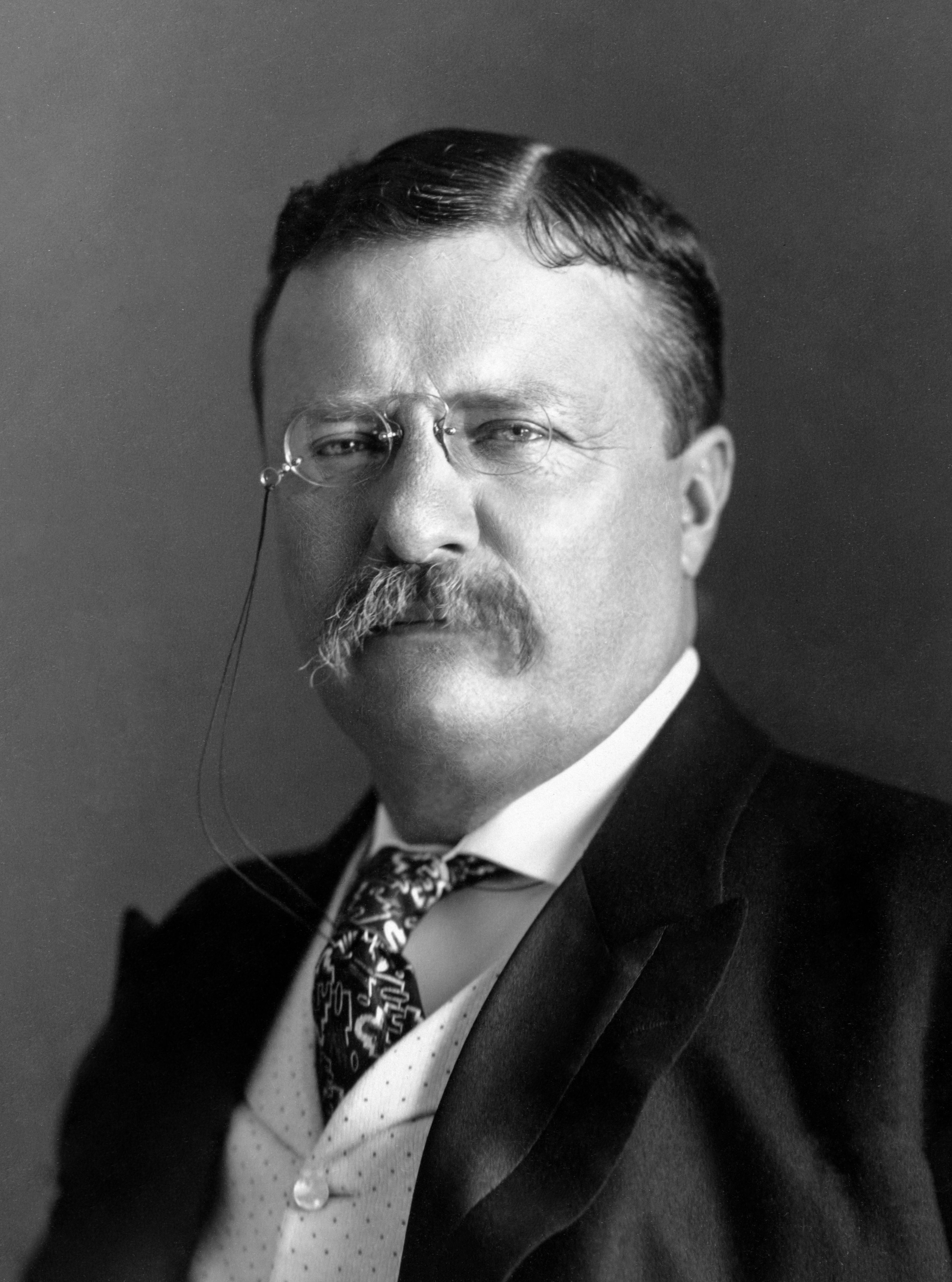 Theodore Roosevelt Jr. ( ;}}}} October 27, 1858 – January 6, 1919), often referred to as Teddy or by his initials, T. R., was an American politician, statesman, soldier, conservationist, naturalist, historian, and writer who served as the 26th president of the United States from 1901 to 1909. He previously served as the 25th vice president under President William McKinley from March to September 1901 and as the 33rd governor of New York from 1899 to 1900. Assuming the presidency after McKinley's assassination, Roosevelt emerged as a leader of the Republican Party and became a driving force for anti-trust and Progressive policies.

A sickly child with debilitating asthma, he overcame his health problems as he grew by embracing a strenuous lifestyle. Roosevelt integrated his exuberant personality and a vast range of interests and achievements into a "cowboy" persona defined by robust masculinity. He was home-schooled and began a lifelong naturalist avocation before attending Harvard College. His book ''The Naval War of 1812'' (1882) established his reputation as a learned historian and popular writer. Upon entering politics, Roosevelt became the leader of the reform faction of Republicans in New York's state legislature. His first wife and mother died on the same night, devastating him psychologically. He recuperated by buying and operating a cattle ranch in the Dakotas. Roosevelt served as Assistant Secretary of the Navy under President McKinley, and in 1898 helped plan the highly successful naval war against Spain. He resigned to help form and lead the Rough Riders, a unit that fought the Spanish army in Cuba to great publicity. Returning a war hero, Roosevelt was elected governor of New York in 1898. The New York state party leadership disliked his ambitious agenda and convinced McKinley to choose him as his running mate in the 1900 election. Roosevelt campaigned vigorously and the McKinley–Roosevelt ticket won a landslide victory based on a platform of victory, peace, and prosperity.

Roosevelt assumed the presidency at age 42, and remains the youngest person to become president of the United States. As a leader of the progressive movement he championed his "Square Deal" domestic policies. It called for fairness for all citizens, breaking of bad trusts, regulation of railroads, and pure food and drugs. Roosevelt prioritized conservation and established national parks, forests, and monuments to preserve the nation's natural resources. In foreign policy, he focused on Central America, where he began construction of the Panama Canal. Roosevelt expanded the Navy and sent the Great White Fleet on a world tour to project American naval power. His successful efforts to broker the end of the Russo-Japanese War won him the 1906 Nobel Peace Prize. Roosevelt was elected to a full term in 1904 and promoted policies more to the left, despite growing opposition from Republican leaders. During his presidency, he groomed his close ally William Howard Taft to succeed him in the 1908 presidential election.

Roosevelt grew frustrated with Taft's conservatism and belatedly tried to win the 1912 Republican nomination for president. He failed, walked out, and founded the new Progressive Party. He ran in the 1912 presidential election and the split allowed the Democratic nominee Woodrow Wilson to win the election. Following the defeat, Roosevelt led a two-year expedition to the Amazon basin where he nearly died of tropical disease. During World War I, he criticized Wilson for keeping the country out of the war, and his offer to lead volunteers to France was rejected. Roosevelt considered running for president again in 1920, but his health continued to deteriorate and he died in 1919. Polls of historians and political scientists rank him as one of the greatest presidents in American history. Provided by Wikipedia
Showing 1 - 20 results of 822 for search 'Roosevelt, Theodore, 1858-1919.', query time: 0.12s Refine Results
1

This item is not available through EZBorrow. Please contact your institution’s interlibrary loan office for further assistance.
Book
2

This item is not available through EZBorrow. Please contact your institution’s interlibrary loan office for further assistance.
Book
8

This item is not available through EZBorrow. Please contact your institution’s interlibrary loan office for further assistance.
Book
9

This item is not available through EZBorrow. Please contact your institution’s interlibrary loan office for further assistance.
Manuscript
11

This item is not available through EZBorrow. Please contact your institution’s interlibrary loan office for further assistance.
Book
12

Hunting trips of a ranchman, Hunting trips on the prairies and in the mountains;
by Roosevelt, Theodore, 1858-1919
New York, Review of Reviews, 1904
Call Number: Loading...
Located: Loading...

This item is not available through EZBorrow. Please contact your institution’s interlibrary loan office for further assistance.
Book
16