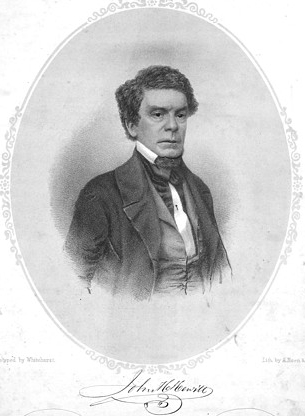 John Hill Hewitt (July 11, 1801, New York City — October 7, 1890, Baltimore) was an American songwriter, playwright, and poet. He is best known for his songs about the American South, including "A Minstrel's Return from the War", "The Soldier's Farewell", "The Stonewall Quickstep", and "Somebody's Darling". His output during the American Civil War earned him the epithets "Bard of the Stars and Bars" and "Bard of the Confederacy".

Over his career, Hewitt wrote over 300 songs, a number of cantatas and operettas, and one oratorio, as well as plays, poems, and articles for magazines and newspapers. He also worked as a theatre manager, magazine and newspaper editor, concert performer, and music teacher at seminaries for women. Provided by Wikipedia
Showing 1 - 20 results of 25 for search 'Hewitt, John Hill, 1801-1890.', query time: 1.04s Refine Results
1

Rejected address! for the opening of the new Richmond Theatre, to be spoken by the acting manager in the character of a clown.
by Hewitt, John Hill, 1801-1890.
Published 1862
Call Number: Loading...
Located: Loading...