Nina Consuelo Epton (1913 – 29 October 2010) was a British radio producer, broadcaster and travel writer, particularly active in the 1950s and 1960s. She travelled alone through Spain, North Africa, and Indonesia. In the 1970s she published a number of historical works about royalty, two books about cats, and a novel based on the life of Jane Digby.

Her greatest commercial success was a series of literary, historical and sociological books about amorous relationships: ''Love and the French'' (1959), ''Love and the English'' (1960), ''Love and the Spanish'' (1961). In various combinations these were translated into French, German and Spanish. All three were reprinted by Penguin Books in 1964–1965. Provided by Wikipedia
Showing 1 - 20 results of 52 for search 'Epton, Nina,', query time: 0.01s Refine Results
1 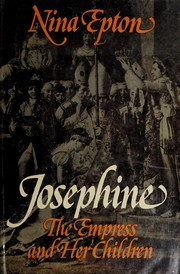 This item is not available through EZBorrow. Please contact your institution’s interlibrary loan office for further assistance.
Book
18