Cavafy's friend E. M. Forster, the novelist and literary critic, introduced his poems to the English-speaking world in 1923, famously describing him as "a Greek gentleman in a straw hat, standing absolutely motionless at a slight angle to the universe." Cavafy's consciously individual style earned him a place among the most important figures not only in Greek poetry, but in Western poetry as a whole.

Cavafy wrote 155 poems, while dozens more remained incomplete or in sketch form. During his lifetime, he consistently refused to formally publish his work and preferred to share it through local newspapers and magazines, or even print it out himself and give it away to anyone interested. His most important poems were written after his fortieth birthday, and officially published two years after his death. Provided by Wikipedia
Showing 1 - 20 results of 203 for search 'Cavafy, Constantine, 1863-1933.', query time: 0.16s Refine Results
1 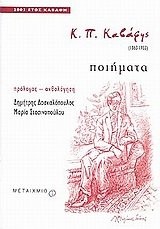 Before time could change them : the complete poems of Constantine P. Cavafy ; translated, with an introduction and notes, by Theoharis Constantine Theoharis.
by Cavafy, Constantine, 1863-1933.
Published 2001
Call Number: Loading...
Located: Loading...